So it’s official I have now been on the Earth for 20 years, 2 decades….. Christ.

I wanted to write a message to my younger self because it actually turns out that I don’t know everything but realised that I’m far too self aware and have already said a lot of it to myself already. So this is a sort of message to my younger self, sort of warning to my future self and mostly a whole lot of classic pics/memories of my life so far.

This is Olivia in her prime. All she wants to do is be naked and finger paint and run around and wear pearls and doesn’t give a damn what anyone thinks. This Olivia is my inspiration for my 20th year (minus the nudity….maybe)

1. Talk nicely to yourself every day

There are going to be plenty of times when you need to sit yourself down and be your own best friend. It’s that same inner voice that goes quiet when you really need someone to talk you out of eating another chocolate bar. She’s a great gal. Depend on her the most out of anyone because she’s the one that won’t let you down and among other lessons learned from The Help if someone really pisses you off in life just put shit in their food.

You think that being older is the promised land (and we’ve recently been reminded by Adele to take a chill pill and enjoy the now). Being 13 is a pretty swell time, no one ever told you how to dress or how to act and whilst that resulted in fashion crimes against humanity be thankful because it also meant that you got to discover yourself and your style (eyeliner and knee high boot fetish and all). 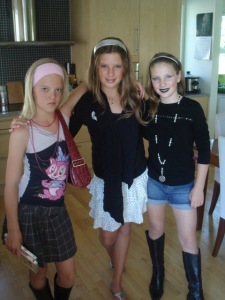 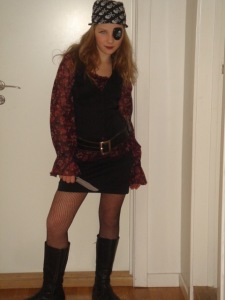 3. Unparalleled self confidence is key to a good life

In that same vein, be thankful you were allowed to basically take yourself way too seriously as a youth. Thankfully it’s paid off because now you know how to talk to adults (kinda) and (kinda) know yourself pretty well. ‘Go confidently in the direction of your dreams’ applies here but could very easily be interchanged with ‘blindly’. Either option works and most of the time they’ve helped you (obliviously or otherwise) to reach your goals.

Mostly at your own jokes cause you’re damn hilarious but never stop laughing. It’s good for the soul.

5. You will never be in the same place as your good mates.

So learn to convey all your emotions through 1am messages and lengthy emails. The friends that really matter are easy to stay in contact with or better yet you don’t stay in contact at all but you know that every time you see a Mcflurry you’re both thinking of each other. The friends that can break you down into a laughing mess just by looking at you and know exactly when you are going to feel terrible and need some loving. Hold on to these friends for dear life and never them go.

6. Make your own rules

Just because someone says something works a certain way doesn’t mean it’s the case. Imagine if people had listened when they said that 12 Chicken McNuggets was ‘too’ many nuggets or that you can’t have a black president. HA. All the best things happen you break the rules and follow what’s right. (but within reason, plz don’t kill anyone)

7. I know you thought the side fringe was going to change your life and fix all your problems but you were wrong.

There is nothing more to say.

8. I know you think you aren’t sporty but you ARE

Somewhere between aged 14 -18 you decided that sport wasn’t really for you. maybe it was because you are forced to decide what your ‘thing’ was in high school and let’s be honest you weren’t fooling anyone with your stellar Wing Defence skills so you decided to drop the game all together, but actually you love playing in a team and exercising is actually really fun so remember why you loved it in the first place. Also just you wait till you discover Lululemon it’s a whole other ball game.

9. Drinking is not a big deal

Over time you will learn about your relationship with alcohol. Beer will make you bloated, RDT’s are a waste of time and Vodka will make you vomit. Nothing beats Pimms on a hot summer day but you have plenty of time to figure all that out. Don’t rush into anything too quickly (not that you have because you were reading Harry Potter at night until you were like 16 #sorrynotsorry). I know I should tell you that drinking alcohol rarely lives up to the hype but I know you won’t listen. Just take your time and remember that drinking is only fun if you get to do it without feeling guilty about ignoring work and when you get do it with good friends. Cheers.

You just never know who needs a hug or a smile. Make someone’s day. You have been privileged enough to be on the receiving end of other people’s generosity and kindness so pay it forward. Be the person people can go to and the one they can rely on for support.

12. Take time for yourself

Know your limits. FOMO is only real if you let it be real (albeit significantly more real between ages of 13-16). Sometimes you just need to take yourself out of the game and give yourself some ‘me time’. No harm in that at all.

13. Listen to your parents

I know you think they totally know nothing but really scarily they do. They know a lot and somehow through this weird parental wisdom they’ve let you quietly develop into the person that you are. This is also a PSA to my parents thank you for dealing with the angst and the tears and the indecision and vomit (from all ages). I love you both dearly and appreciate all that you do for me. You the real MVP’s.

14. Boys are beautiful and stupid at the same time

Not entirely sure you’ve figured this one out yet but it’s a good one to keep in mind. Don’t settle. Wait for guys who make you laugh till you pee yourself and treat you like an actual human being. The ones who WANT to hang out with you and want to tell everyone about it. The ones who think you’re interesting and intelligent and want to act silly with you. Don’t hang around boys who play games or pretend you’re not there when you are. How attractive they are is far less important how than how they make you feel. (that being said if Taylor Kitsch is in the market I’m available any time) I’m not surrendering to being a cat lady just yet.

15. Don’t wait till the end of the week to do your laundry.

Ain’t no body got time for that. Consistency is key.

You’ve been pretty lucky to go to some crazy places in your life and been exposed to some awesome cultures as you’ve grown up. SWEET GREAT. but you also learn a lot from the moments that you don’t Instagram-  like walking around an Italian train station at night with 10 euros to your name, hungry, cold and wet (#truestory). Keep putting yourself in situations where you get the hell out of your comfort zone, it’s amazing and scary and awesome and makes you a better person.

I know you want your bed time to be later and you think that really as an 8 year old you are entitled to more than a 7.30pm bed time but trust me there is nothing more valuable in life than a good sleep. Cherish it while you can.

It can do some pretty epic things, like allowing you to eat 10 slices of pizza in a row or do a front flip off a really high cliff so be thankful for it because that shit is never the same post puberty. For the first 13 years of your life you adventured and danced and flourished in that body without a care in the world. Your body carries you from A to B, it’s never let you down yet, don’t spend time hating it. Love it.

I know you like the sound of your own voice but make sure you pay attention to everyone else once in a while. People have pretty interesting things to say if you let them, you may just learn something.

I don’t know if you’ve caught onto this yet but I like going extremely easy on myself. Don’t take it all too seriously, you have been gifted a beautiful and pretty epic crazy life. And you’ve done some amazing things so far. 15 houses, 5 schools and 3 countries later you’ve managed to squeeze quite a bit into the time you’ve had and met some truly stellar people along the way. 90% of the time you are muddling through and pretending you have your shit together by putting flowers in your bedroom but that’s ok. Hopefully you’ve got the next 20 years to sort it out.